We felt pretty good at the end of the first day, and got a little overconfident about the pace we could set on Day 2.  After all, we only had to drop off the translations, grab the finalized documents from the Civil Registry (8:30 am), and meet with the judge (5:00 pm).  We made tentative plans to travel back to Majahual to see our families for lunch, pick up the best man and the photographer, and be back at the hotel by 3:00 pm for a quick rehearsal.  I was pretty excited.

The beginning of the day should have been an indication of the way the rest of it would go. We were up early in order to meet Elizabeth by 8:00. Simon went out to order breakfast at 7:30, and I started getting ready.  It was right when I was completely undressed that I heard it: running water.  Horrified, I looked toward the bathroom and saw a mass of water flowing down the stairs and straight for the hem of my wedding dress, both of our suitcases, and a variety of scattered clothing, speaker equipment, and wedding decorations on the floor.  Working quickly, I moved as much stuff onto the beds as I could while throwing all of our towels on the water.  This left no time to find any clothing to put on myself, as every time I dashed towards my suitcase (now buried under everything we owned), I would notice something else in the path of the flood.  I finally threw a chemise over my head and ran out the door to find Simon.  Not wanting to shout “the toilet is overflowing!” across the entire hotel, and also not keen to run across the pool deck and into the restaurant in my nightgown, I struggled in vain to mime “I need help!” using large hand gestures from about 100 feet away.  Simon continued to talk to Armando while giving me quizzical eyebrows.  I finally gave up and yelled “COME HERE PLEASE!”  After becoming fully aware of the situation, Simon went to the front desk and told them “we have a flood in our room.”  Fortunately, Armando was able to talk to them in more detail and I managed to get dressed and eat so we could take care of the last of the paperwork. 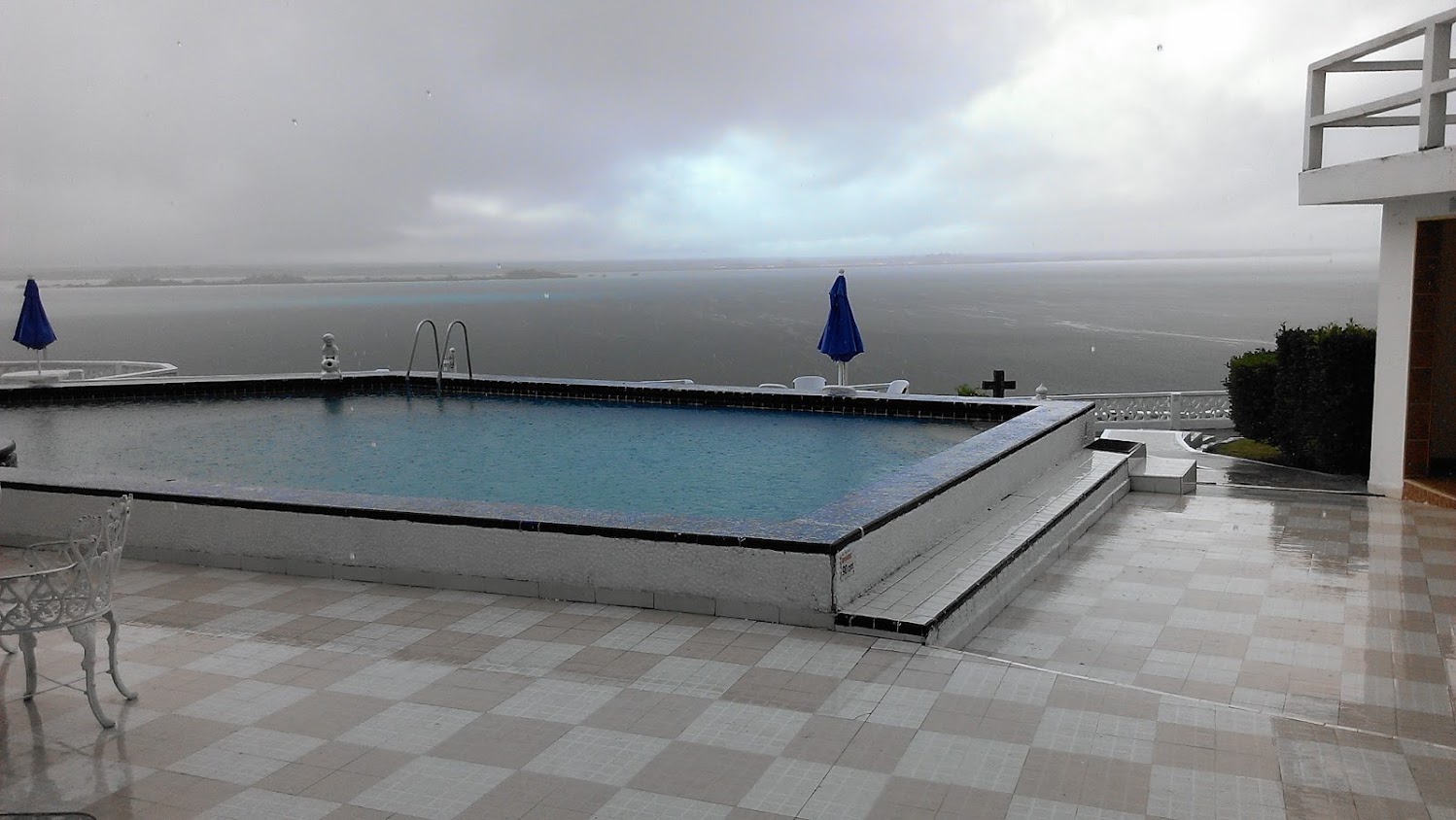 During breakfast, we were told that Mexican wedding ceremonies last at least an hour.  This was news to us, as we had read that all Mexican ceremonies have to be secular and fall under strict guidelines.  In fact, we had been planning to have Simon’s sisters speak for a bit of filler so that our guests would feel they got their money’s worth.  An hour standing outside in the Mexican sun!  There were going to be some angry kids, and lots of gringos falling out all over the place.  We decided we needed some parasols and/or fans.

On the way into Bacalar, we were given our medical records: clean bills of health for both us.  But, when we arrived at the Civil Registry office, we got some bad news.  One of the forms we had filled out prior to arriving in Mexico, a form that had the names, addresses, occupations, and dates AND places of birth of us, our parents, and all four witnesses was not acceptable and had to be completely redone.  We settled in at a local cafe so that Elizabeth could begin the painstaking process.  I went for a quick wander to look at flowers, and the form was finally completed by around 10 am.  It was then back to the Civil Registry to make sure the paper was in order.  We meet up again with the Stern Lady, who suddenly became extremely sweet and asked us if she could have a photo of us for their wall.  She explained that we were the first foreigners to get married there, and so they were learning what to do along with us.  She apologized for any confusion.  We then had to pay somebody, presumably for the license, which took another hour to complete.  At this point we realized our dreams of meeting up with our families in Majahual were not going to happen.  After all of this was done, we were walking back to the car when Elizabeth told us that our birth certificates “live in Bacalar from now on.”  We stopped walking.  After some flabbergasted conversation, we realized that she meant that our translated birth certificates would be filed and stay at the Registry office in Bacalar.  We started walking again. 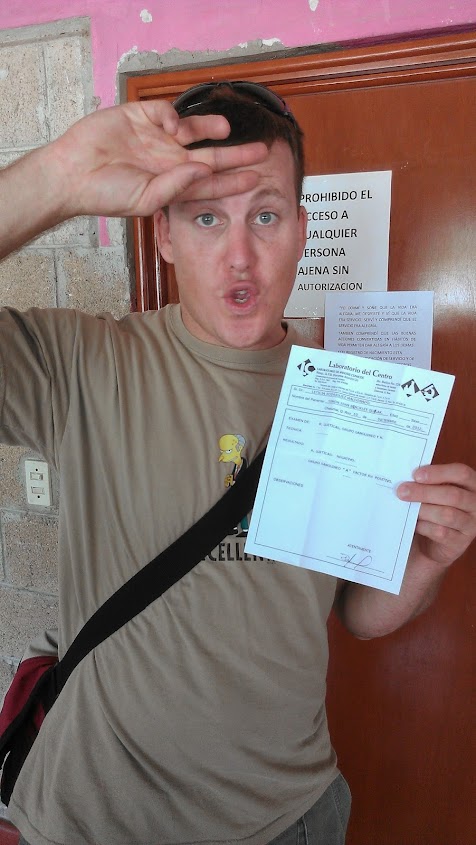 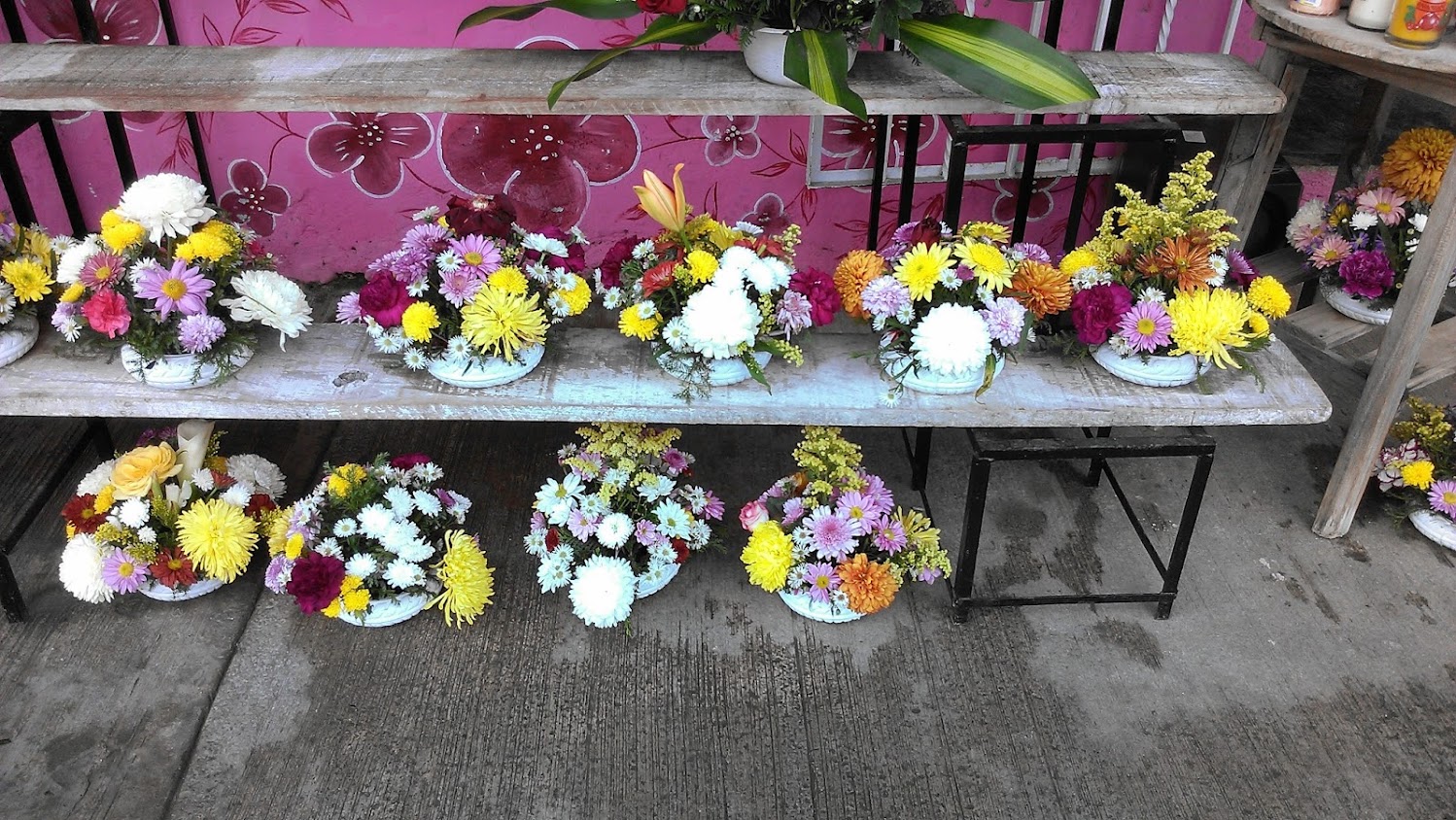 When we arrived back at the hotel, we were pleased to find that our room was dry and clean, and that the maid staff had even put a few romantic touches on the place (which also meant two extra towels!). 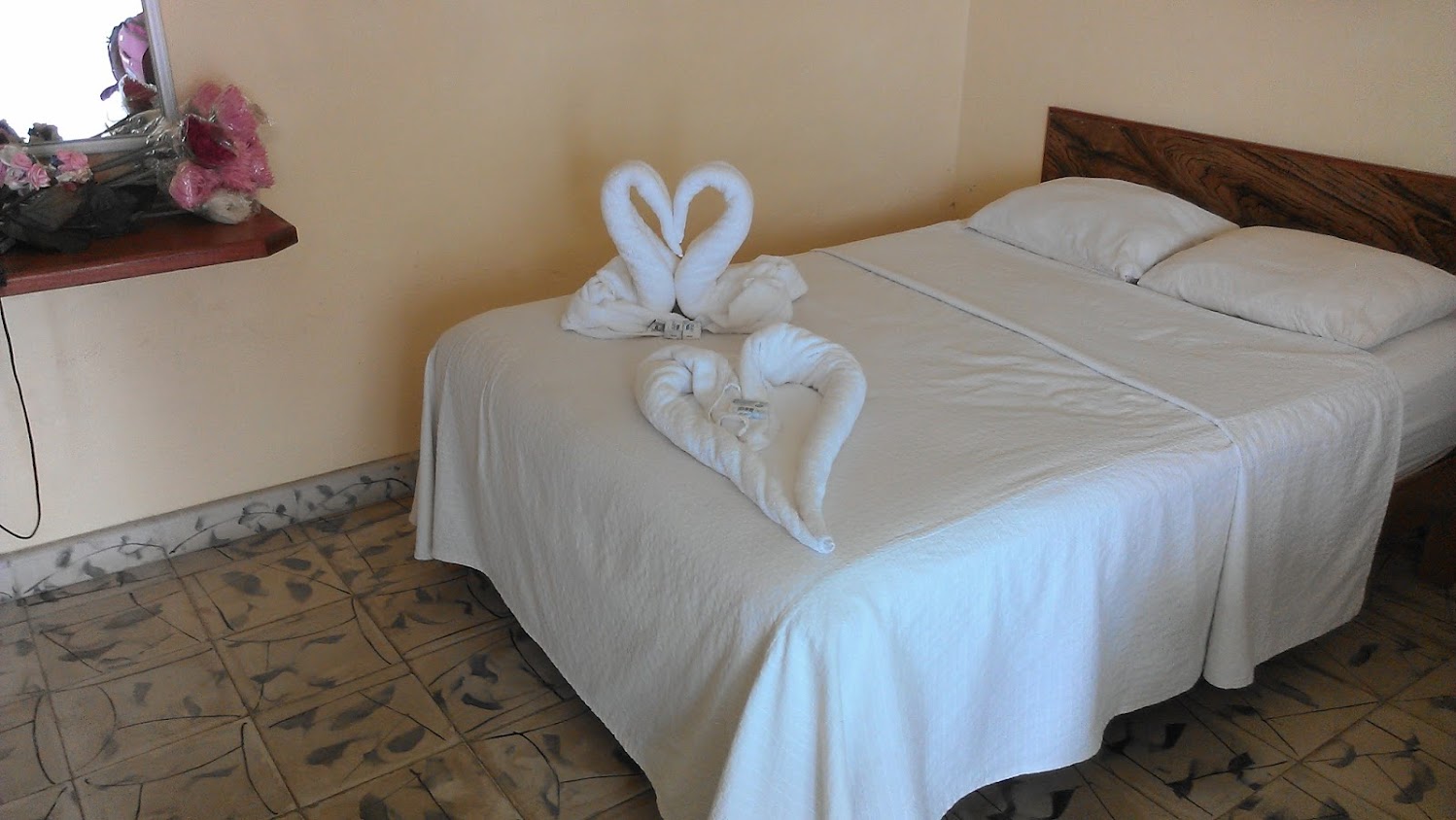 We then coordinated with my mom, Will, and Alex so that they could get to the hotel by 3:00 to do a quick rehearsal.  Since we had a couple of hours to kill, we decided to make a quick rum run to the Free Zone between Mexico and Belize.  We wanted a few bottles of One Barrel for the reception, and they only sell the stuff in Belize.  We also thought we could pick up fans/parasols and some more decorations for the photobooth.  This was an unmitigated disaster.  It’s a long story, but we ended up paying a guy to get us out of there (and to get us some extremely overpriced One Barrel) because 1) we neglected to go through immigration, 2) none of the shops in the Free Zone sold One Barrel and the guy went into Belize to get it, and 3) Simon didn’t have his exit visa on him.  Simon threatened to stay in Belize because he seemed to think that it was all my fault.  I fed him some plantain chips and a coke and he agreed to come back to Mexico, but still contends that it was all my fault.  At least we had some rum to show for it.

We arrived back at the hotel just in time to meet with the gang, and then a surprise group of visitors arrived: all of my siblings and their kids!  They had gone to a ruin and decided to stop by on their way back.  While in the jungle they were caught in a deluge, so everyone was a bit soggy.  We got in a quick practice, made some tactical decisions, and Alex figured out his camera placement setup. 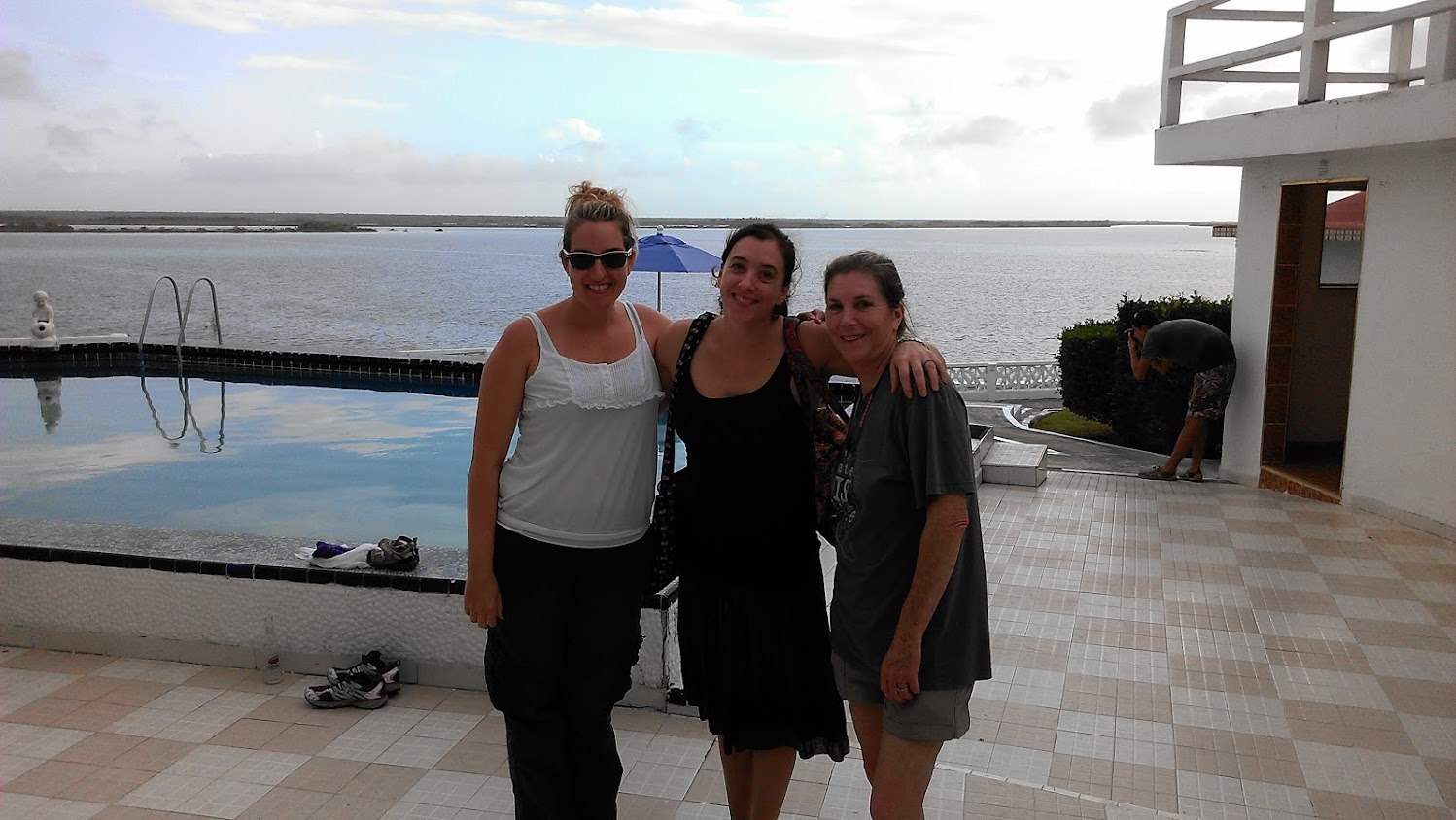 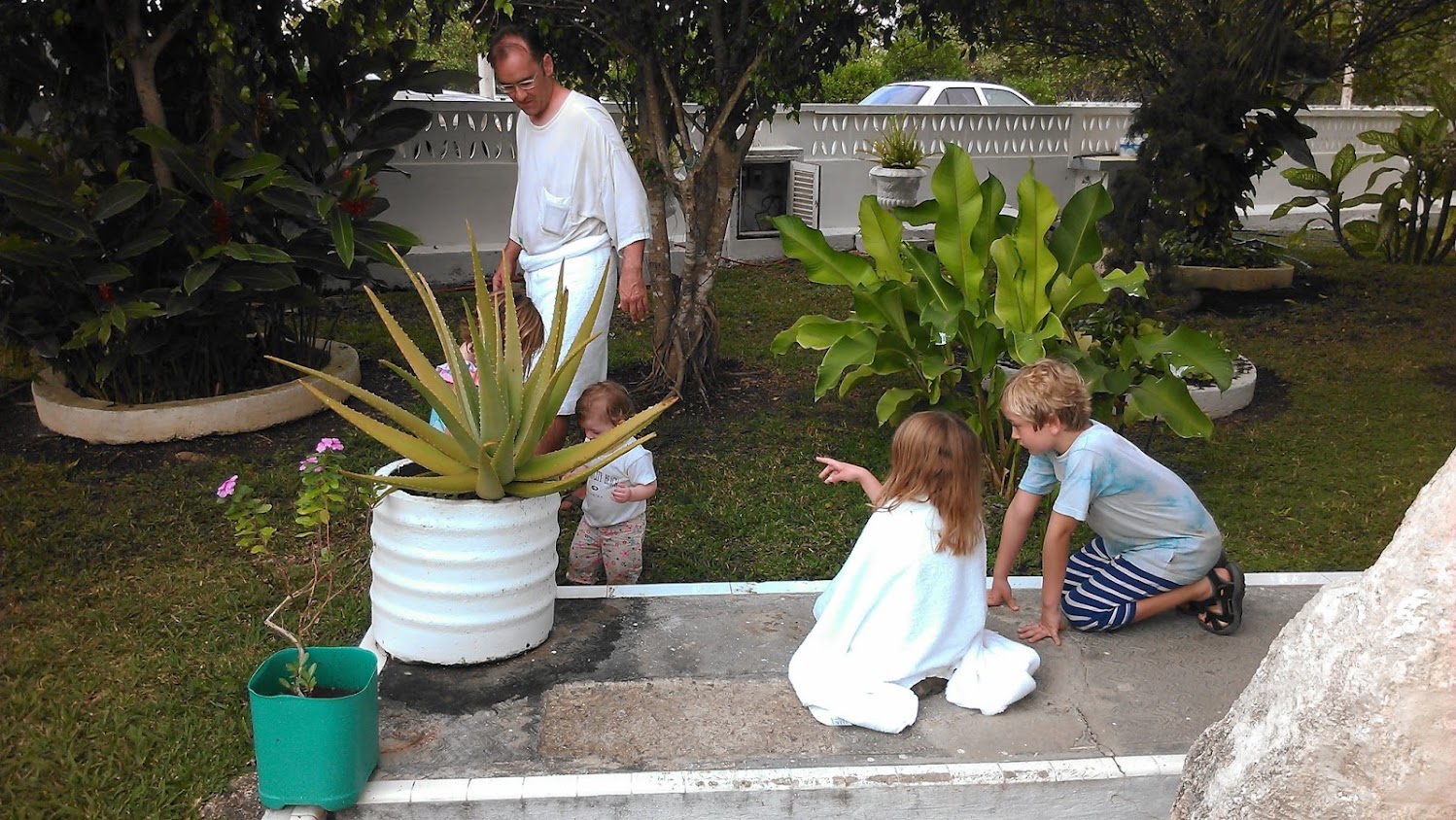 The judge arrived shortly afterwards, and was just a really lovely man.  He and his translator showed us the written ceremony, which turned out to be exactly what we had hoped for.  It was thoughtful and sweet, with just enough American/English touches to make it recognizable as a wedding.  When I asked how long the ceremony would take, he responded, “10 or 15 minutes.”  We breathed a giant sigh of relief.  Simon and I thanked him profusely, and he said that he only requested that we come back in five years to renew our vows.  Finally, something was going right.

And then, Stern Lady showed up. And she was stern again.  There were several spelling mistakes on the translated documents (my name was spelled Ivi, and they got Simon’s last name wrong again among other things).  These issues seemed to be fixable, until we got to my place of birth.  On one form it said I was born in Dubach, Louisiana, but on another it was listed as Ruston.  This was not good.  This was bad.  Es terrible, no es posible.  Cannot fix it, it is on the birth certificate, we do not know what to do.  The wedding is tomorrow and the forms need to be finalized tonight.  By this point we had quite a crowd, and my brother, who was thoroughly amused by the pronunciation of our hometown (Rrrrroostone), was obliged to tell the story about how I was born in a car in Dubach, but brought in to the hospital in Ruston post-delivery.  They did not seem amused.  After a few more minutes and explanation, Stern Lady said “Ruston esta cerca de Dubach? Ah, ok!” Once they realized that Ruston and Dubach were neighboring towns in the same state, we got the final Si on the Mexican No No Si dance.

It looked like we were actually going to get married.  Simon headed back to Majahual to spend the evening with his family, and Mom, Marianne, and Jayme stayed at Bacalar with me.  Malia and Walter arrived, along with a few extras and we settled in for a nice night on the lagoon.

Up next: The wedding day (in case you forgot Mexicans take weddings seriously, you will be fingerprinted. During the ceremony)